Although most people enjoy eating seafood, some will only eat certain  types of seafood while others avoid eating it altogether for fear that it is harmful or unsafe. That may be because of some myths about it that have persisted. 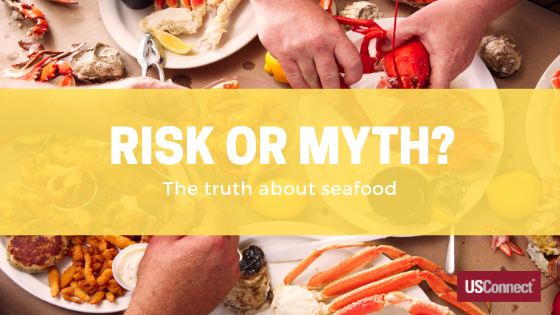 Let’s examine several sayings to discover whether they are myths or if we are taking a risk to ignore them.

Mercury is a mineral which occurs naturally in our environment. It can be turned into the poisonous compound, methylmercury, by bacteria and natural processes and can accumulate in streams and oceans where it enters the food chain as each fish absorbs the mercury of smaller fish it eats. That is the reason that larger fish contain larger amounts of mercury than smaller ones. Almost all fish contain some amounts of mercury.

Mercury toxicity can disrupt brain function and harm the nervous system. It can pass through the placenta of a pregnant woman and accumulate in the blood and tissues of the developing fetus and can also pass through a mother’s breast milk. So, pregnant women should eat only low-mercury fish (sardines, trout, salmon, etc.) and  limit it to 12 oz. per week. They need to avoid eating raw or uncooked fish since it may contain microorganisms that can harm the developing fetus. Click here to learn more.

Fish and seafood are loaded with important nutrients such as iodine and vitamin D that many people are deficient in, as well as omega-3 fatty acids which are crucial for optimal body and brain function and are strongly linked to a reduced risk for many diseases.

The Food and Drug Administration tests for mercury and the Environmental Protection Agency determines safe mercury levels for women of childbearing age. And most states issue advisories to warn people when they are aware of methylmercury contamination stating the types, size, and amounts of fish that are of concern.

Conclusion: It is safe to eat fish and seafood as long as you choose those that are low in mercury and observe guidelines for the amount you should consume per week.

A widely known myth about oysters is that you should only eat them in months that contain the letter “R” like September and October, etc., but not June, July, and August. This used to be true because the warm months were when oysters spawned and not eating them gave them time to reproduce. Spawning oysters do not taste good and warmer waters in the “R-less” months also increased the prevalence of certain bacteria in raw oysters that made people sick.

Raw oysters could make you sick, but strict government regulations lower that risk. Making sure oysters are properly cooked will eliminate that danger.

NOAA Fisheries estimates that the US imports more than 80% of the seafood we eat with approximately half of that produced from aquaculture (or farmed). Currently, there are at least six federal agencies that regulate different aspects of the U.S. Aquaculture industry. These regulations have promoted greater confidence in farmed seafood, and today, people eat oysters year-round.

Conclusion: It is most likely safe to eat oysters year-round because of strict government regulations that govern the seafood industry.

This myth may have started with Casanova, a famous womanizer from the 18th century who was said to have eaten 60 of the mollusks each day to power his amorous adventures.

In 2005, George Fisher, a chemistry professor at Miami’s Barry University, found that mussels contained the amino acid, D-Aspartic acid, which had been found to increase the level of sex hormones in lab rats. Although the study did not include oysters, Fisher was quoted in a number of different publications speculating that the amino acid might contribute to an aphrodisiac effect.

Oysters are a good source of zinc (a zinc deficiency can have a detrimental effect on the reproductive system) which is known to help boost testosterone levels.

But in an article by Elaine Magee, MPH, RD, she states “No food has been scientifically proven to stimulate the human sex organs. But foods and the act of eating can suggest sex to the mind, which in turn can help stimulate desire in the body.”

Conclusion: No real aphrodisiac effect has been proven, but if the act of eating oysters creates a sensual pleasure, why not!