If you’re an avid runner, the thought of running on the beach may sound glorious. The sand is soft and inviting, the view is gorgeous … but don’t be fooled, running on sand is far more challenging than you may think. 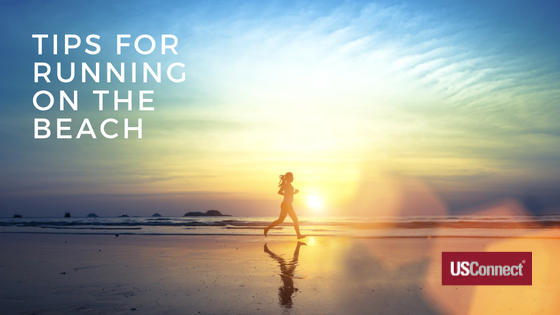 According to active.com, several studies have found that running on sand consumes more energy than running on asphalt—burning as many as 1.6 more calories per mile. There’s also much less impact force when you run on sand, but with the added resistance, your heart rate rises faster, and your muscles have to work harder.

If you’re planning to run on the beach while on vacation, or if you’re lucky enough to live close to the beach, take note of these tips before trading in the pavement for sand.

Check local tide reports to see when low tide will be before you head out for a run. It’s best to run at low tide or within an hour or two around the lowest point. As the ocean recedes, it leaves hardening sand behind that creates a hard-packed surface perfect for running.

For your first few beach runs, wear your regular running shoes. It may be tempting to ditch the sneakers and go barefoot, but running without them on new terrain could end up being too much for your feet and cause pain or injury. Sand can also be hard on your ankles, and sneakers will help provide stability. After you do a few runs on the sand and your body gets more used to it, if you want to go barefoot, your feet should be able to adapt. Just be aware of sharp shells, glass, or other debris on the beach that could cut your feet.

Don’t expect to run your average pace on the beach. The change of terrain and lesser impact of the sand will make it feel like your legs are heavier than normal and will become unbearable if you try to run at the speed you’re used to. Slow down and enjoy the view.

Slather on the sunscreen

Protect your skin while running with an SPF30 water-resistant sunscreen, and be sure to bring a water bottle to stay hydrated.

Beach running can be a challenging workout. Be sure to take a rest day in between beach runs to let your body recover from this new work out.

Eating a diet rich in fruits and vegetables has many health benefits: it can protect against many chronic diseases, including heart disease, obesity, and Type 2 diabetes, and protect against certain cancers. But approximately three-quarters of Americans don’t eat enough fruits and vegetables daily, according to the 2015 Dietary Guidelines for Americans. 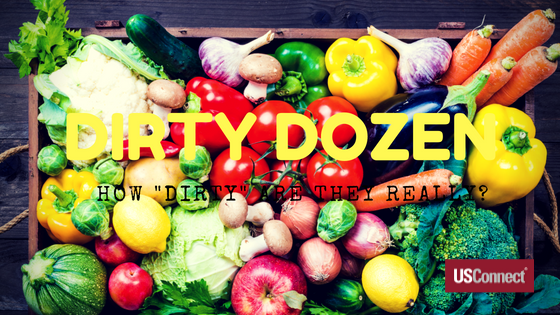 With all of these wonderful health benefits, why are so many consumers avoiding eating  produce? Fear of pesticides is one reason.

Most consumers have heard of the “Dirty Dozen,” a list of fruits and vegetables that supposedly contain the highest levels of pesticide residue. The list was started by the Environmental Working Group (EWG) in 2004, and the organization releases an updated “Dirty Dozen” list annually, urging consumers to purchase only the organic versions of those particular fruits and vegetables. But consumers who don’t have access to or can’t afford to buy organic produce report that they avoid buying produce at all.

Just how dirty are the “Dirty Dozen,” really? To put the EWG’s “Dirty Dozen” list in proper context, it’s important to understand that they don’t use the same strict methods for measuring risk that food scientists typically do. They tend to rely on alarmist and sensationalized reports that media outlets love. For example, EWG also annually releases the “Clean 15,” a list of conventional produce that doesn’t have detectable levels of pesticide residues, yet this list does not get the same media attention that the “Dirty Dozen” does. Additionally, a recent Forbes article points out that the EWG has strong ties to “big organic marketers.”

According to agdaily.com, recent USDA and FDA reports show that both organic and conventional food is safe. “According to the sampling data, 99 percent of residues on fruits and vegetables, when present at all, are well below safety levels set by the EPA. And an April 2018 article published on agdaily.com, stated that FDA sampling shows that 50 percent of the foods sampled had no detectable residues at all.

If buying organic is not in your budget, or it’s not easy to find in your area, you can rest easy knowing that conventional produce is perfectly fine. If you still have concerns, simply wash your produce under running water. According to the FDA, you can reduce and often eliminate residues, if they are present at all, on fresh fruits and vegetables simply by washing.

The bottom line is this: don’t believe everything you read about pesticides on produce. The benefits of eating more fresh fruits and vegetables far outweigh any minimal risk a minute amount of pesticide residue that might be on those strawberries or apples may pose.

It’s July and many people are heading out on that much-anticipated summer vacation: a time to relax and recharge, whether it’s at the beach, lake, mountains, or sightseeing in a new city. 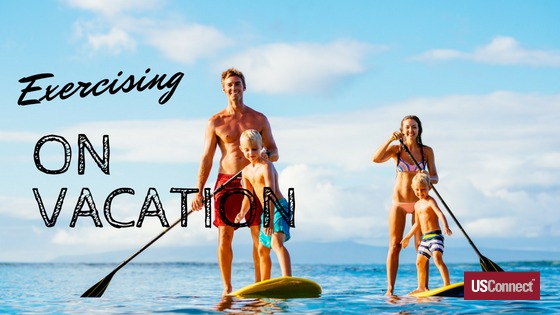 While vacation is definitely a time to unwind and indulge, it’s also easy to indulge a little too much and get off-track with exercising regularly. Finding ways to stay active while on vacation is easy to do; it just takes a little forethought and planning.

One of the best tips is to remain consistent: If you regularly work out three times per week at home, plan to do the same while on vacation. That can be hard for some folks to even think about because most people perceive exercise while vacationing as taking away from the fun parts and also the desire to avoid anything that resembles everyday chores. The good news is that exercise can be a fun part of any vacation and can be easily incorporated without having structured exercise time.

Here are some tips to keep you on track with your fitness routine while on vacation:

– Set realistic expectations – If you don’t work out daily for an hour a day at home, don’t think you can do it while on vacation. Decide how much and what type of exercise you can incorporate into your trip; for example, taking a walk on the beach at sunset counts as exercise.

– Pack your workout shoes and clothes. Don’t forget to pack your gear so you’ll be more likely to exercise while away.

– Get outdoors. No matter where you’re headed on vacation, getting outside will get you moving.  Whether it’s a morning swim in the hotel pool, a walk on the beach, a hike in the mountains, or sightseeing in a new city—all of these activities are easily incorporated into your vacation.

– Try new activities. Vacation is the perfect time to try new recreational activities, such as kayaking, paddleboarding, snorkeling, hiking, surfing, and more. You can also join a walking tour to explore local sights and landmarks.

– Enlist your travel partners. Vacation is about spending time with family and friends, so grab your travel buddy and go for a run on the beach or rent bikes and hit the trails.

Cookouts are a summer tradition, and let’s face it, nothing tastes better than a burger or hot dog made on the grill. Grilling is not just fun and easy, it’s also a healthful way to cook. There’s no better time than summer to experiment with new foods cooked on the backyard grill. 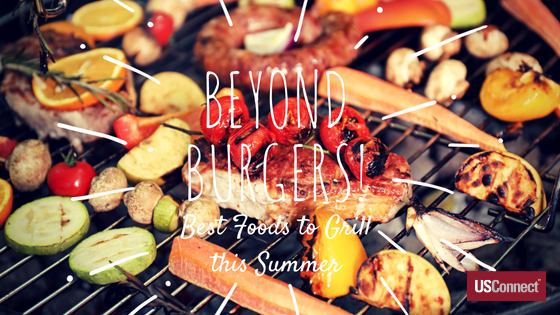 Think beyond hamburgers and hot dogs and fire up the grill to try these easy recipes. Then experiment with other foods on your own to create new summer recipes.

Take your favorite summer veggies from the garden or the farmers’ market and season with salt and pepper, coat them with olive oil, and grill.  Think squash, eggplant, peppers, onions, mushrooms, and more.

Add some shrimp to the grilled vegetables and make shrimp skewers. Kids love food on a stick and will be more likely to eat their veggies!

Corn on the Cob

Corn is a great side dish for any summer meal. Grilling corn gives it a delicious, crisp texture.

Place salmon skin-side up directly on the grill and cook for 8 minutes then flip. Season with a marinade of your choice or serve plain.

Lamb chops
Lambchops about an inch thick cook in three to four minutes on direct heat, so be sure to watch them closely.

Cut a sweet potato in half and place each half in the center of a rectangle of aluminum foil. Turn pouches every 10 minutes until the potatoes are tender and cooked all the way through, approximately 20-30 minutes.

Grill slices of pineapple or peaches (or grill an entire pineapple, sliced down the middle). Serve fruit plain, or add some brown sugar and vanilla ice cream for a refreshingly sweet dessert.