Breast Cancer Awareness Month, with it’s pink-washed campaigns and numerous pink products, is mainly associated with women, but men can get breast cancer too. While rare, men do develop breast cancer, and the topic is often taboo and rarely discussed. This lack of awareness often means men who develop symptoms may not recognize them or associate them with breast cancer, and they may be diagnosed at a later stage when the cancer is not as treatable. 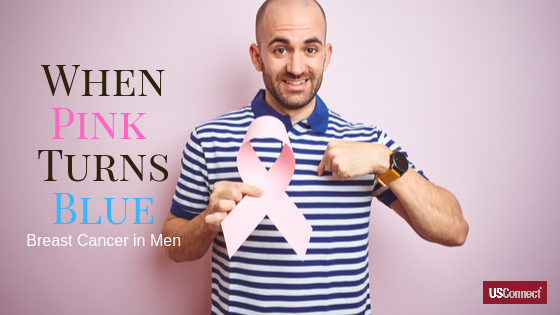 According to the National Breast Cancer Foundation, Inc., men are born with some breast cells and tissue. And although men don’t develop milk-producing breasts, a man’s breast cells and tissue can still develop cancer. It is much less common, with less than one percent of all breast cancer cases in males, and only one in 1,000 men will ever be diagnosed with breast cancer in his lifetime.

Because breast cancer awareness for males is less, and many men who do develop symptoms delay seeking treatment, men carry a higher mortality rate from breast cancer than women. Unlike women who are recommended to get annual mammograms and do regular self-breast exams, men aren’t routinely screened for breast cancer, so when it is detected, it’s usually at a much more advanced stage. Essentially, most men just don’t think they can get it.

There are certain risk factors that may make a man more likely to develop breast cancer:

Symptoms of breast cancer in men can be similar to those for women, but men may not associate these changes with cancer. This causes a delay in diagnosis. It’s important that men recognize that any changes to their breasts should always be checked by their physicians.

Breast Cancer Symptoms in Men Include the following: