Fall’s favorite flavor is back! 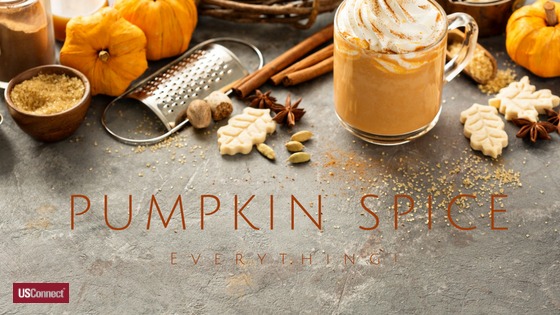 The first day of fall was last week; have you had your pumpkin spice today? Ever since Starbucks debuted its now-iconic Pumpkin Spice Latte drink in 2003, #pumpkinspice has started to trend on social media in August and continued to rise throughout the fall. Starbucks’ drink even has its own Twitter handle—@TheRealPSL—and a whopping 115 thousand followers.

Starbucks has done well with its Pumpkin Spice Latte; the store has sold over 200 million of the drinks in the past decade, with approximately $100 million in revenue just from Pumpkin Spice Lattes in 2015. Starbucks’ success has spurred countless copycats; it’s a rare coffee shop that doesn’t offer a pumpkin spice drink in the fall, and pumpkin spice-flavored coffee drinks and accoutrements are widely available at grocery stores in the fall.

Of course, the pumpkin spice trend has now spread far beyond coffee. Some pumpkin spice flavors seem like an obvious fit: baked goods, breakfast cereal, and even tea are popular pumpkin-spiced items. Other items like pretzels, wine, and kale chips don’t obviously lend themselves to pumpkin spice flavor. According to ratings service Nielsen, pumpkin-flavored items have brought in $414 million in the US between July 2016 and July 2017.

Why does pumpkin spice have such a strong hold on American culture? The answer may lie in the past. Pumpkins are native to North America and were a staple of colonial life. Some historians suggest that the current pumpkin spice craze represents a nostalgic yearning for an earlier, simpler agrarian life. The spices in pumpkin spice—nutmeg, cinnamon, and cloves—are the spices of pumpkin pie, the quintessential Thanksgiving dessert.

Like many coffee drinks, Starbucks’ Pumpkin Spice Lattes come with a hefty dose of sugar and fat: 12 grams and 14 grams respectively in a Grande with 2 percent milk and whipped cream. That’s more sugar that you’d find in a 12-ounce can of Coke, and about one-third  of your healthy fat intake for the day. Luckily, you can tone those numbers down by requesting skim milk and skipping the whipped cream. Or make your own with simple ingredients like pureed pumpkin, vanilla, and a jar of pumpkin pie spice. No matter what, you have plenty of pumpkin spice options to get you through the season.