New Year’s resolutions? That’s so old hat. March is National Nutrition Month®, and it’s a great time to recommit to a healthier lifestyle. 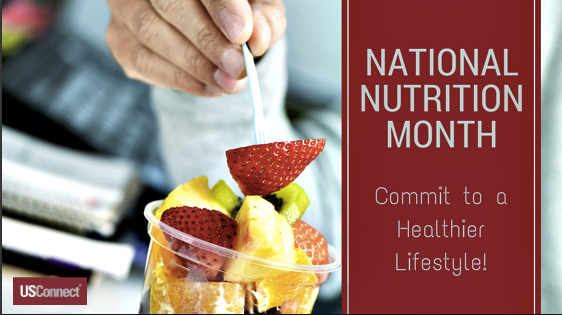 National Nutrition Month®, which started in 1973 as National Nutrition Week, is a nutrition education and information campaign of the Academy of Nutrition and Dieticians. This year, the theme is “Put Your Best Fork Forward,” and it encourages everyone to make healthier food choices. Even small changes, made consistently, can have a big effect.

The Academy of Nutrition and Dieticians provides a robust toolkit on how to celebrate and promote National Nutrition Month®; it includes ways to get people involved with special events, banners, and educational materials. It even includes games like this timeline of fad diets. Along with such gems as the Baby Food Diet (14 jars a day), the Banana Diet (self-explanatory), and the Cabbage Soup Diet (the main side effect was flatulence), you’ll notice that similar fads tend to reappear again and again. For instance, 1985 saw the Caveman Diet which bears a striking resemblance to the Paleolithic Diet that is so popular today.

Most of all, National Nutrition Month® is about making healthy choices. It aligns with the Dietary Guidelines for Americans 2015-2020 from the Office of Disease Prevention and Health Promotion. Not sure where to start? Check out MyPlate.gov which offers tracking tools, tip sheets, and even customized healthy eating checklists.

National Nutrition Month® is a perfect fit with USConnect’s program: The Right Choice … for a Healthier You™. The Right Choice … for a Healthier You™ is managed by USConnect’s staff dietician and offers nutritional guidelines for fresh food products on each vending machine′s touch screen. Benefits managers and others can use National Nutrition Month® to promote workplace health by making sure employees are aware of these healthy guidelines.

How many hours per day do you spend sitting at your desk? As previously discussed in our post about standing desks, working Americans spend an average of six to 10 hours a day in a seated position, usually in front of a computer. In fact, whether they work or not, most Americans are quite sedentary; they spend most of their time sitting, and they walk fewer than 5,000 steps per day. 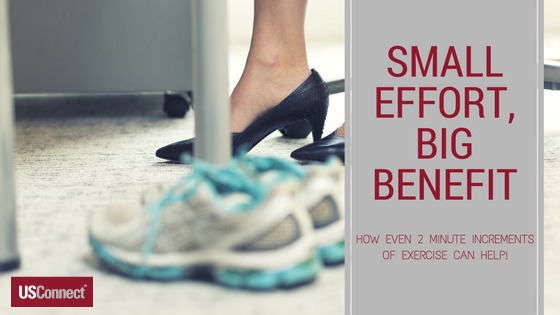 The sitting aspect seems to be particularly troublesome for people’s health. Research has shown that long periods of sitting, even for those who also exercise frequently, can have serious negative health impacts, including type 2 diabetes, cancer, dementia, heart disease, and a higher risk of dying.

Given the conflicting priorities of work, family, and other commitments, most Americans (80 percent) have trouble meeting the American Heart Association’s (AHA) recommendations for exercise and activity: at least 30 minutes of moderate-intensity aerobic activity at least five days per week for a total of 150 minutes per week. As the AHA notes; however, something is always better than nothing. If you can’t do a full 30 minutes, make it 15. If you can’t do it five days a week, do it three.

A recent study even suggests small intervals—two minutes per hour—of light activity can improve overall health. The study followed 3,243 participants for three years and found that just two minutes per hour of light-intensity activity, like walking, made a significant difference in the participants’ long-term health, including a 33% lower risk of death.

Reducing sitting time can also have some immediate positive effects, like shaking off lethargy and avoiding back pain. When a person sits for an extended time, most of his/her weight rests on his/her sacrum. Over time, this compresses the vertebrae and leads to pain and discomfort. Similarly, most desk chairs keep users’ hips flexed at an angle of 90 degrees or less. After hours of sitting like this, the hip flexors can shorten temporarily; this can lead to low back pain. Getting up for a two-minute walk can let those bones and muscles relax and recuperate, and the increased blood flow can improve mood and alertness. It’s a win-win!