It’s pumpkin spice season, and the craze has been in full effect since before Labor Day. This fall favorite flavoring can now be found in everything from coffee to Oreos, candles, and cleaning products. Whether you love it or loathe it, the pumpkin spice obsession is here to stay. The good news is that there are many surprising health benefits to pumpkin spice, but these are found in the spice’s ingredients and not the popular sugary, syrupy pumpkin spice lattes or limited edition baked goods lining the shelves at the supermarket. 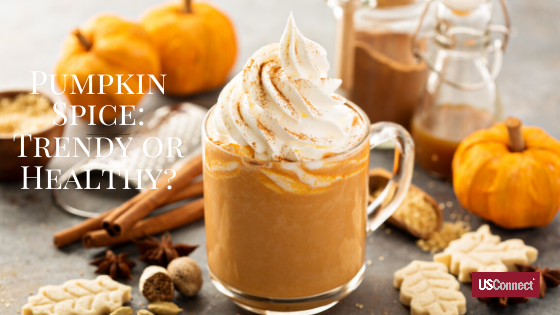 Pumpkin Spice Blend
This warming blend of spices doesn’t actually contain any pumpkin; the traditional pumpkin spice blend includes ground cinnamon, nutmeg, ginger and allspice. These ingredients are all good for you if you limit the sugar that is added to most pumpkin spice drinks and baked goods.

There’s nothing like the warm, comforting aroma of pumpkin spice this time of year. It’s tempting to indulge in all things pumpkin spice, especially because limited edition pumpkin spice products are everywhere. But if you want to get the health benefits from the spice, you’ll have to limit the number of pumpkin spice lattes, bars, cookies, breads, and pies you consume. Many of these seasonal products contain large amounts of sugar and preservatives.

You can still enjoy pumpkin spice season without risking your health and your waistline by choosing all-natural products or better yet, making your own. Make the spice blend at home and add it to oatmeal, Greek yogurt, or homemade pumpkin bread. And you can still enjoy the occasional pumpkin spice latte, or make it healthier by requesting nonfat milk, no whipped cream, and fewer pumps of the pumpkin syrup.